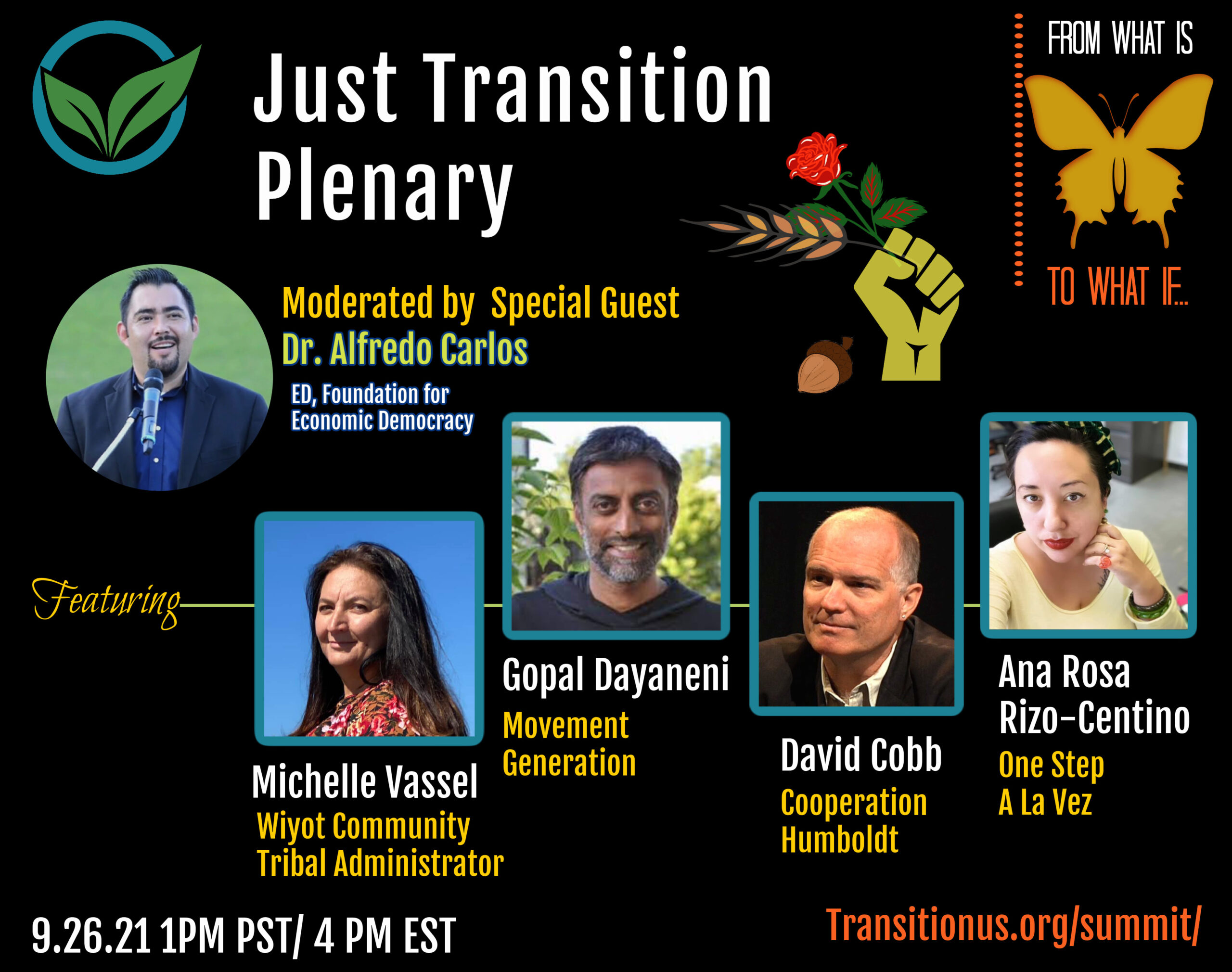 In this panel, we will discuss the need for grappling with justice issues as we transition off the fossil fuel economy. This panel will survey the challenges we face as we work to dismantle systems that marginalize and oppress, and explore why climate and justice are so interwoven. Panelists will also share inspiring Just Transition projects across the country, like Dishgamu Humboldt.

Dr. Alfredo Carlos was born in Jerez, Zacatecas, Mexico and grew up in the Harbor Area of Los Angeles in a working class immigrant community. As  immigrants he and his family, like many other immigrants and working people lived in a barrio  experiencing life as people who were working poor. This experience of living in poverty has come to influence and to a large extent define his work as a scholar, an activist, a mentor and a father. Even though his parents worked very hard and long hours, they barely scraped by. As a kid growing up in poverty he did not understand the discrepancy between the story of the American Dream and the reality of poverty for most of the people in his community.  He dedicates all of his work in all of its aspects to improving the quality of life for working people, people of color and developing other young critical scholars who challenge the systems and structures that create misery in our society for working people.

Gopal Dayaneni has been involved in fighting for social, economic, environmental, and racial justice through organizing & campaigning, teaching, writing, speaking, and direct action since the late 1980s. Gopal is a co-founder of Movement Generation: Justice and Ecology Project. MG is rooted in vibrant social movements led by low-income communities and communities of color committed to a Just Transition away from profit and pollution and towards healthy, resilient and life-affirming local economies. MG is a founding member of the Climate Justice Alliance. He has served on the staff-collective and is now a member of the board.

Currently, Gopal supports movement building through his work with organizations including The Climate Justice Alliance, ETCgroup, and the Center for Story-based Strategy. He is also a Fellow with the Center for Economic Democracy. Gopal is a trainer with The Center for Story-based Strategy, and serves on the boards of  The Working World, People’s Solar Energy Fund and Occidental Arts and Ecology Center. He is also on the advisory boards of the Catalyst Project and The Sustainable Economies Law Center.  Gopal is on the Steering Committee for Cooperation Richmond, and for the Our Power Loan Fund and is an active member of the Seed Commons. Gopal works at the intersection of ecology, economy and imperialism, and teaches in the undergraduate program at Antioch University in Los Angeles and the Masters in Urban Sustainability program at AULA, where he was the first Climate Justice Fellow. He also teaches at San Francisco State University in the Asian American Studies Department and the Race and Resistance Studies Department.Gopal was an elementary and early childhood educator, working formerly as a teacher and also as the co-director of the Tenderloin Childcare Center, a community based childcare center supporting children and families forced into homelessness. Most importantly, Gopal is the parent of two amazing young rabble-rouser. He lives in Huichin/Oakland in an intentional, multi-generational social justice community of nine adults and a squabble of kids.

Ana Rosa Rizo-Centino: Elected to Maywood City Council in 2007, Ana Rosa Rizo-Centino served as Maywood’s Mayor. She is now executive director of One Step A La Vez. Ana Rosa graduated from UC Santa Barbara and has worked locally on many social justice efforts. A Maywood native, her work focuses on government transparency, support for working families, and environmental justice issues, such as clean drinking water. She currently serves as President of the Central Coast League of Conservation Voters (CCLCV), Secretary on the boards of La Casa de la Raza and SB Clergy and Laity United for Economic Justice (CLUE), board member for Santa Barbara County Action Network and serves on The City of Santa Barbara Creeks Commission, as well as vice president of the Santa Barbara County Outreach and Equity Commission for our countywide climate action plan.

David Cobb is the Co-Coordinator of the US Solidarity Economy Network, the Executive Director of Cooperation Humboldt, and serves on the Transition US Collaborative Design Council. He was the Green Party nominee for President in 2004, and initiated the recall effort that launched the election integrity movement, which led to the discrediting of so-called “Black Box Voting.”

Michelle Vassel serves as the Tribal Administrator (CEO) of the Wiyot Tribe, who has stewarded the land in and around Humboldt Bay (Wigi) in Northern California since time immemorial. As Tribal Administrator, she is responsible for planning, managing, and directing all the day-to-day operations of the Tribal government. She was active in the historic return of Tuluwat Island, the fight to protect Tsakiyuwit, and serves on the Board of Directors of Cooperation Humboldt.